Listening through the mess

Listening through the mess created by abuse is difficult for most.

We have been looking at the difference between being cherished and being abused, as part of a series on crossed boundaries. Our boundaries are vital, and part of the evil of abuse is the way abusers take what isn’t theirs, or go where they do not belong, without consent. Disregard for rules and boundaries is a feature of narcissism,1 and of entitlement.2

Abuse makes a lot of mess

In the previous post, we touched on some of the ways abusers disrupt our capacity to hear clearly. Those tactics can create significant, even overwhelming, internal noise and confusion. The trauma itself can make it difficult to hear clearly because a victim might be dealing with flashbacks, unwelcome memories, triggers, or other problems like hypervigilance.3 Listening through the mess of all those feelings, thoughts, and messages can be extremely difficult.

But shouldn’t we be able to hear a “still, small voice”?

People in Christian communities might often talk about listening for “the still, small voice”. When God spoke to Elijah on Mount Horeb, he used a gentle whisper, and I would imagine after running in fear for his life, Elijah would have had no small amount of internal noise. However, we mostly mean an internal “still, small voice”. That’s ok, and there are other parts of scripture that support it, but it doesn’t appear to be what happened to Elijah in this moment. He seemed to hear an audible whisper.

We have talked before about Ahab and Jezebel’s abusive behaviour. They worked through third parties,4 employing “sons of Belial” to do their work. But before all that happened, they were in the process of killing the prophets and had turned their ire towards Elijah, promising to kill him. So now, Elijah runs for his life:

Elijah was afraid and ran for his life. When he came to Beersheba in Judah, he left his servant there, while he himself went a day’s journey into the wilderness. He came to a broom bush, sat down under it and prayed that he might die.

“I have had enough, Lord,” he said. “Take my life; I am no better than my ancestors.”

Then he lay down under the bush and fell asleep.5

My heart aches for him.

Elijah was terrified and physically exhausted. And although we see later in the story that God has other plans for Elijah, God’s first priority is dealing with his wellbeing. God sent an angel, not to talk, or focus on spiritual things, but to feed him, and give him strength. (And with hot, fresh bread!)

All at once an angel touched him and said, “Get up and eat.” He looked around, and there by his head was some bread baked over hot coals, and a jar of water. He ate and drank and then lay down again.

The angel of the Lord came back a second time and touched him and said, “Get up and eat, for the journey is too much for you.” So he got up and ate and drank. Strengthened by that food, he traveled forty days and forty nights until he reached Horeb, the mountain of God. There he went into a cave and spent the night.6

Even Elijah had trouble listening through the mess

Elijah showed incredible courage throughout his life. He was perhaps the “greatest” prophet. He showed a remarkable capacity to hear God’s voice. By this time, he had already trusted God’s voice in incredibly difficult circumstances and had seen God perform amazing miracles. And yet, he found listening through the mess resulting from this trauma difficult. It’s no wonder. He felt so overwhelmed, exhausted, and afraid that he just wanted to die.

After his initial flight for his life, Elijah travelled another 40 days. It seems reasonable to assume that gave him time to start to process what was happening, but he still didn’t hear God’s direction clearly, or accurately assess his situation.

It’s not until Elijah arrives at Horeb, finds shelter in a cave, and gets some sleep, that we see what looks like an internal dialogue with God:

And the word of the Lord came to him: “What are you doing here, Elijah?”

He replied, “I have been very zealous for the Lord God Almighty. The Israelites have rejected your covenant, torn down your altars, and put your prophets to death with the sword. I am the only one left, and now they are trying to kill me too.”7

Listening through the mess created by Ahab and Jezebel’s behaviour was not easy. Their murderous abuse was a fact. But not everything Elijah believed about his situation was accurate. He was not the only one left – not by a long shot! There were 7,000 others,8 plus an incredible apprentice in Elisha.

So what can we take from Elijah’s story so far?

Elijah had a dilemma that many abuse victims face:

There was bona fide danger.

But Elijah was perhaps hypervigilant, and the Bible is about to tell us not all the fear he felt was necessary. Not all the conclusions he drew were accurate. So Elijah had to work out the difference between dangerous people and safe people when his whole system was no doubt telling him everyone was dangerous, and he was completely alone.

When there is danger – and let’s not downplay the potentially life-threatening danger of abusive people – it is important to see it for what it is. But we also need to tell the difference between danger flags and the shockwaves of abuse. That’s not easy. And in this story, God does not expect Elijah to just have what we might call “a good quiet time” and hear clearly by the end of it. In what comes next, we almost see God bend down to adjust, so Elijah can hear his voice. God speaks to him out loud.

What did God do first? He looked after Elijah’s safety. He comforted him and protected him. Comfort food, water, sleep, shelter, companionship, and time. Fascinatingly, it seems to follow Maslow’s Hierarchy of Needs9 very closely. This is such a great example for us to follow. Safety and wellbeing are vital, and God gets it. He ain’t going anywhere.

This story affirms the difficulty of listening through the mess created by abuse. Even Elijah found it difficult, and God took that into account. Given we don’t all experience God’s audible voice, it is reasonable to trust he has given us other ways of working through the messiness to hear more clearly. We are going to keep looking at that journey. But it might be helpful to just acknowledge the degree of difficulty. It’s ok to struggle here, and patience is encouraged.

If you are struggling right now, you might find 1800RESPECT a helpful service to call. Your safety matters.

Elijah, who was a victim of Ahab and Jezebel's abuse, had to work out the difference between dangerous people and safe people when his whole system was no doubt telling him *everyone* was dangerous. Click To Tweet

← Good shepherds cherish their sheep How can we hear God's voice more clearly? → 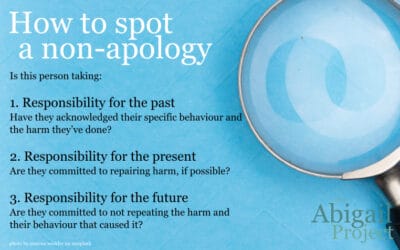 How to spot a non-apology

As we saw with Saul in our last article, abusers might employ a barrage of emotional abuse tactics that can make it very difficult to know how to spot a non-apology. Those tactics can make conversations about harm and responsibility very confusing. To cut through that... 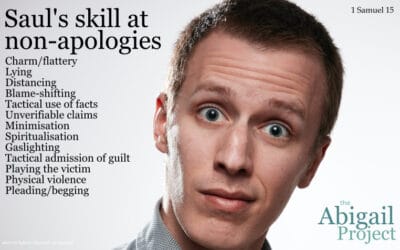 As part of his armoury of abusive tactics, we can see Saul’s skill at non-apologies. If we understand his tactics, that can help us spot non-apologies in our own situations.

In our last few articles, we have been looking at some of the story of King Saul, and his son Jonathan. The few details we have of Saul’s life give us many examples of emotional and physical abuse, and one of his tactics was to avoid responsibility for his behaviour. Avoiding responsibility is a key feature of abuse. That hasn’t changed over millennia. 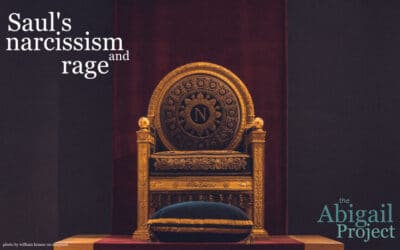 In our previous post, we looked at some of King Saul's blame-shifting tactics, and now we come to consider Saul's narcissism and rage. When Saul's desires were frustrated, he lashed out at others. In the story of Israel's war with the Philistines at this time, Samuel...